As well as tagging each other in memes and going out for food, being a good friend also sometimes means being an ally – and that’s a whole different story.

An ally is someone who stands up for, supports and encourages the people around them. It’s a term that gets used a lot in the LGBTQIA+ community. In this case it refers to someone who is heterosexual and/or cisgender, but who tries to make the world a better place for people who identify as LGBTQIA+. 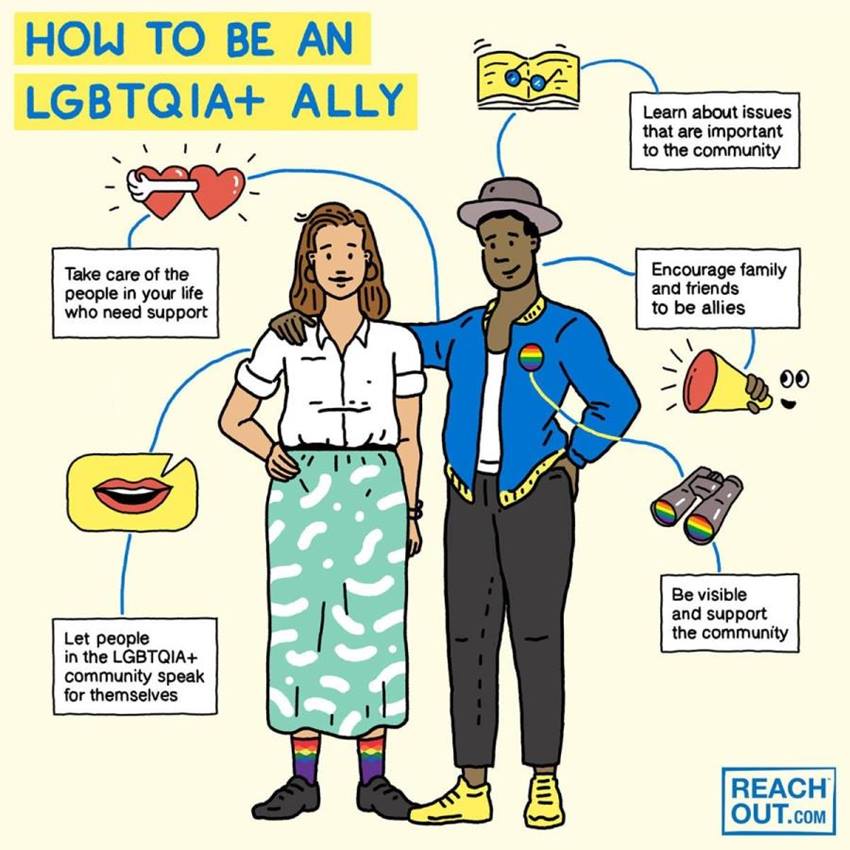 View a text version of the infographic.

Being an ally means:

So, how can you be a good ally? Here’s how to get started!


Learn about issues that are important to the community

Talk to people who identify as LGBTQIA+, read books and other publications, listen to podcasts, and visit businesses or websites run by people from the community. Immerse yourself in their world as much as you can, and get a sense of what it’s like to live in their shoes.


Be visible and support the community as much as you can

This means going to rallies and events, calling out homophobia, transphobia or queerphobia wherever you see it, and supporting businesses, charities or other initiatives owned or operated by LGBTQIA+ people.

Lady Gaga refers to herself as an ally; note: she is bisexual.


Take care of the people in your life who need support

Whether it’s friends, family, classmates or workmates, keep an eye on the people you know who are part of the LGBTQIA+ community. Part of being an ally means being there for people when they need you. Offer your shoulder to cry on, give them space to vent or rage, or spend time with them doing something they enjoy, to keep their spirits up.


Be aware of the space you take up

If people ask you questions about the community or for your opinion on an issue, recommend LGBTQIA+ books, magazines, podcasts or social media accounts they can follow. This allows everyone to hear the people in the community speak for themselves.


Talk to the people around you and support them to be an ally, too

The great thing about being an ally for one group of people is that it can open your eyes to be an ally for everyone. People don’t fit into just one box. ‘Intersectionality’ is a term used to describe all the different identities or social categorisations a person has. If someone who identifies as LGBTQIA+ is also a person of colour or also lives with a disability, they might be discriminated against because of each of these identities. So, when you stand up for one marginalised group, you’re standing up for them all.

To be an effective ally, we have to be intersectional – which means we can’t just fight for the rights of LGBTQIA+ people. We have to be fighting for equality for everyone, regardless of their race, gender identity, disability or sexual preference.

You now know more about being an ally, and the steps you can take to become one. Try choosing one action to start with: go to a rally or an event, educate yourself on issues that are important to the community, or check-in with your LGBTQIA+ mates after a particularly bad news day.

Remember: you really can make a difference to other people.