Gender, sex and sexuality are all pretty complicated ideas – and definitely not as black and white as some people might think. The most important thing to realise is that you’re not defined by your sexuality or gender. You’re you, and that’s awesome.

To help us understand how these concepts are different from each other, and where they might overlap, Trans Student Educational Resources, an organisation in the US, has developed a handy graphic called ‘The Gender Unicorn’. 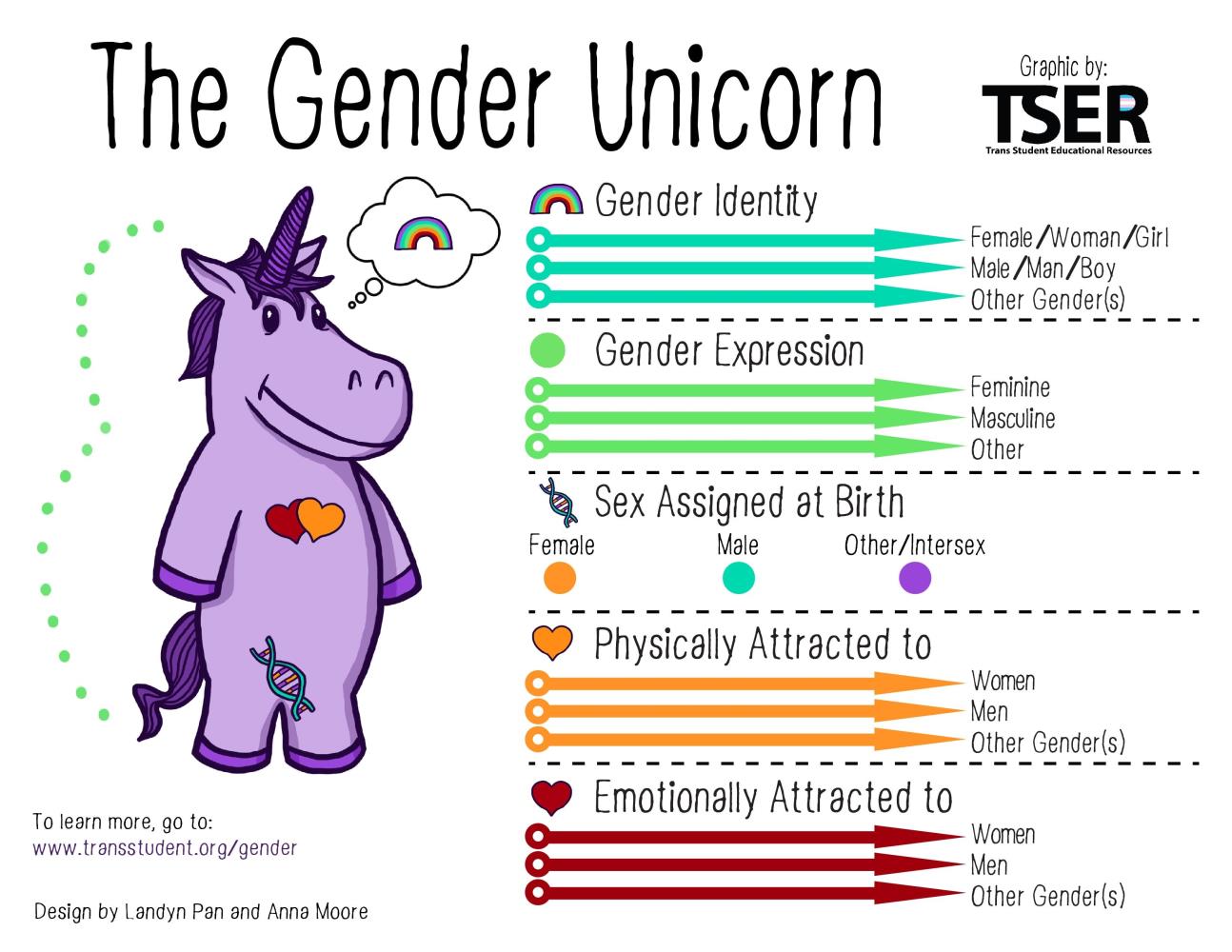 View a text version of this infographic.

The Gender Unicorn is designed to help us understand gender, sex and attraction (sometimes referred to as ‘sexuality’). You can see that some of the concepts have arrows next to them, and others just have dots. This is because some concepts are on a spectrum or range, while others are more fixed.

If you were to fill out this graphic, you would put an ‘X’ as far along the arrow as you feel is accurate for you, or an ‘X’ in the circle you identify with. Filling it out might help you get a better sense of how you feel about these parts of yourself.

On the image, you can see that gender identity has the rainbow symbol next to it, and that the unicorn is thinking about the symbol. This is because gender identity is inside us; it’s how we feel about our own gender.

We may have been taught that male and female are the only gender identities. This is the ‘binary’ view of gender. But actually, there are many different understandings of gender. If you don’t identify exclusively with being a male or a female, and instead feel like you fit somewhere between the two, you might identify with being ‘non-binary’. Many cultures have broader ideas around gender than just ‘male’ or ‘female’, and have done so for a very long time. Check out the two-spirit people in Native America, bakla in the Philippines and fa'afafine in Samoa.

How much do you feel like a man, a woman, or something else? This is your gender identity. This is a spectrum, because you could feel a little like a man, a lot like a woman, and maybe also a bit like something else. Or you could feel like none of these. That would make you agender, meaning that you don’t feel any of these gender identities fit you. That’s okay, too!

When you were born, the doctor or midwife assigned you a sex based on your body’s physical characteristics. This is a fixed category that may be different from how your gender self-identity develops as you grow. Does your birth certificate say you’re male, female, or intersex or other? Most people are assigned ‘male’ or ‘female’ when they’re born, based on their external genitalia. Some people might be classified as ‘intersex’ (or something else) when their sex characteristics, chromosomes or hormones are a bit ambiguous and don’t fit neatly into what we designate as ‘male’ or ‘female’.

Near where the unicorn’s heart would be are the orange and red hearts for physical and emotional attraction. These two have a lot of overlap, and generally represent parts of your sexuality or sexual orientation.

Physical attraction refers to the characteristics of a person that might make you physically or sexually attracted to them. Physical attraction can come from a variety of factors, including someone’s gender identity, gender expression, or the sex they were assigned at birth.

Emotional attraction relates to the characteristics of a person that might make you emotionally or romantically attracted to them. This can also come from a variety of factors, including gender identity, gender expression, or the sex they were assigned at birth.

Both physical and emotional attraction can also come from a lot of other places, like someone’s personality or even the things you have in common.

Attraction is presented as a spectrum because some people (like bisexual or pansexual people) are attracted to multiple genders, and could be attracted to different genders in different ways, or to one gender more than another.

Many people find that these labels don’t fully explain their attractions. Some of these people might call themselves ‘queer’. Thinking of attraction as a spectrum allows us to fully explore our attractions without boxing them into a category that might not feel quite right.


How do all these concepts overlap?

Hopefully, the Gender Unicorn helps to make things a little less confusing. Just remember: no matter what your gender identity is, or who you’re attracted to, you are enough, exactly as you are. You don’t have to fit a neat label. You can just be you.

This article was produced thanks to support from Darling Downs and West Moreton PHN.