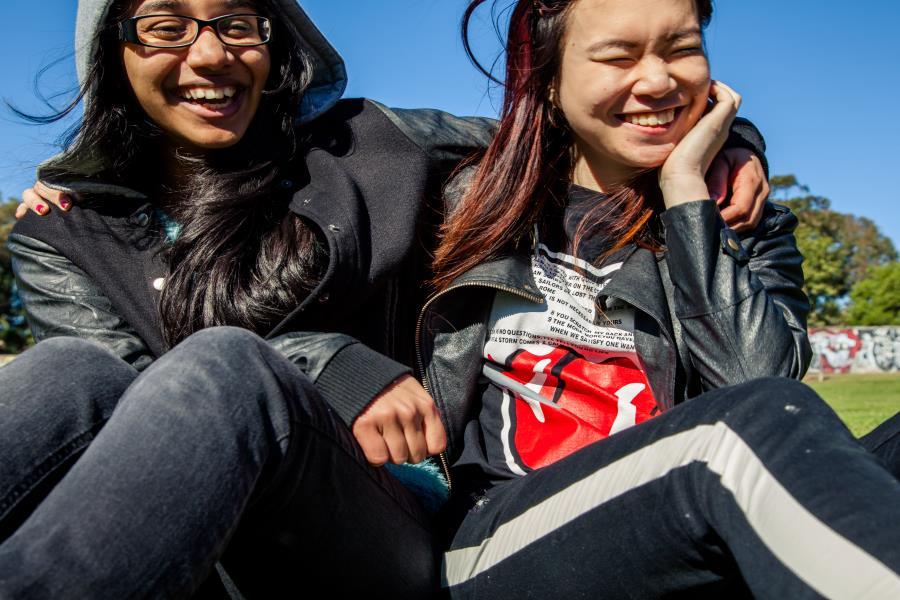 Rebecca and I met in Year 10 at a high school in Sydney’s west. We lived around the corner from each other, which made it easy for us to hang out after school and on the weekend. We would spend a lot of time together – like, as much as we could!

Right from the early days, I counted on her as a big support in my life. I always knew she would be straight up with me about things I was doing or how I was acting. It used to annoy me, but I’m grateful for it now. Who knows where I would have ended up if she hadn’t sorted me out then?

For Years 11 and 12 I moved to a new school, which made it pretty hard to hang out with Rebecca. As well as not seeing her every day in class, I was pretty focused on doing well in my exams, so I didn’t have much of a social life. I missed her, but I also had new friends. She got a boyfriend around that time, too. So, we were both enjoying other things, but we still supported each other. We kept in touch as much as we could, texting to check in – just to make sure we didn’t totally lose touch.

Things got really hard when we finished school. Rebecca had a baby, and I moved to live at uni. I adored her son and made a real effort to visit her as much as I could. When she had her second baby, her life became way more full-on. But we stayed close – I visited as much as I could, and we would FaceTime every day. We were still really relied on each other.

When things became super-hectic for Rebecca, she started to drift away from me. I was caught up with uni and work, so I didn't realise at first that we had become so distant. Then, when I found out she was spending time with some of our other friends, I felt really left out. I confronted her about it, and while I probably didn’t handle it super-well, her reaction was really nasty.

I made the decision to put our friendship on hold and focus on myself for a while. I didn’t talk to her about it, and looking back, that wasn’t the best decision. But it felt like it was the right thing for me at the time. It affected us massively for quite a while.

In the long run, taking a break from our friendship has been a good thing for Rebecca and me. We had our time apart and it made us realise that we do really care for each other and need to be in each other’s lives. There have been ups and downs in our relationship since the very beginning, but we’ve proven we’re true friends by sticking it out. The most recent drama we went through taught me that it’s okay to take time-out on friendships if they’re getting too full-on. If that person is meant to be around, then they’ll always find their way back to you.


Here’s what I know

I’ve always been someone who likes to focus on the positives in life and to treat myself as a priority. I know that I’m a good friend and deserve to have good friends around me. As soon as someone becomes a negative influence on my life, I like to take a step back from them, even if it’s just for a little while.

If you’re someone who’s struggling with a friendship that’s a bit all over the place, take a step back and look at what’s going on. Chat to your friend, but don’t be afraid to take some time out if that’s what’s best for you. Remember, you have to do whatever you can to take care of yourself.